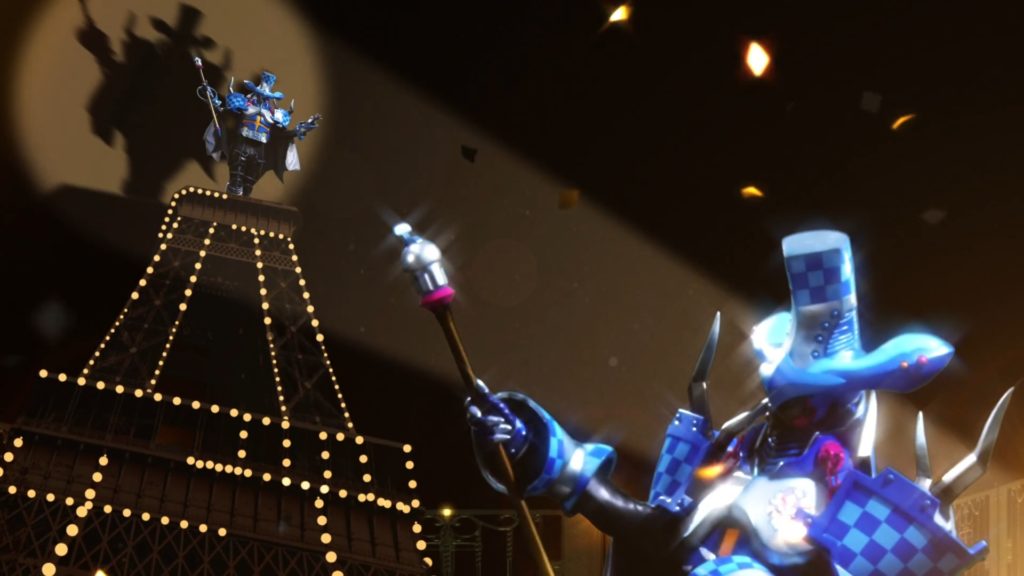 But, soft! What light through yonder window breaks?

Welcome to the discussion thread for Dinoknight Sentai Ryusoulger, episode 07; "The Princesses of Planet Cepeus".
(Show's title and episode title translation may vary depending on your fansub group of choice.)
This week: Princess Cardena of the Planet Cepeus arrives on Earth to request the Ryusoulgers' help in finding her missing sister, who she claims was taken by the Druidon. Soon after, the Ryusoulgers confront the new Druidon commander Wizul.

Wait, so that's really it for Jouji Nakata? WHat a waste of his talents. Also, how about actually revealing the entire villain group finally?

The best part of this episode was all of those kids -- who are obviously martial-arts students -- beating up Red.

I think Koichi Sakamoto is in love with Bamba, though, because this episode is the only time the character's come close to seeming as cool as the show thinks he is. But the whole "He's too cool to trust the team thing" just isn't interesting. The guy's doing that horribly choreographed "dance" with them -- just knock this off.


Dr Kain said:
Wait, so that's really it for Jouji Nakata? WHat a waste of his talents. Also, how about actually revealing the entire villain group finally?
Click to expand...

I don't think Toei posted their usual farewell pictures, so I'm assuming Tankjoe will be resurrected down the line. Gaim and Zyuoh were a waste of Nakata's talents, too. And after voicing a couple of Sentai's memorable characters, Hikaru Midorikawa's being wasted as this latest idiot villain.

Wow... How long has it been since we've seen kids doing more than just being captured and cheering for the heroes? That was some nice choreography, and in unison no less! Definitely makes up for the reveal of the new general. He comes off a bit too showy for no reason. Reminds me of the whole Galaxy Warriors thing from Ninja Steel, and I am beginning to get tired of hearing the word "Showtime".

In fact, I must say, this episode is just jam packed with stuff! They finally use Tryamigo's costume for more than just the giant robot battles. I was beginning to think seeing him stand around the Ryusoulgers in human size was just a promotional shot. But they've done it, and he's learning to talk! I wonder if that means all the Kishiryu will learn to talk, taking a page from AbaRanger. Who knows, maybe it'll be revealed some of them knew how to talk all along! And we finally saw the reveal of Kishiryu-Oh Fortress Mode! 7 episodes in. In any other show, both of these reveals would have been done much sooner. I'll never stop praising a show that takes it time with stuff like this and doesn't overload the audience with new thing, after new thing, after new thing.

Koh is 209 years old.... Either these Ryusoulgers are not actually human, or they have a very different definition of what a "year" is.
And Bamba's distrustful act is getting old, but it's also hypocritical when he clearly holds family in high regard. Heck, even Towa sees right through him, and that's saying something!
Last of all, I was surprised at how well this alien princess story was being handled. I was afraid that this would be where the show jumps the shark, but they tied it in with the Druidons pretty easily, and didn't hog too much of the spotlight. By the end of the episode, they are casting suspicion on the sisters, making them seem like they are hiding something. But based on the preview for the next episode, I doubt the reveal will be that dramatic. Still, it's nice to see the show is getting better after a few less than stellar episodes in the beginning. Consider me invested!
You must log in or register to reply here.
Share:
Facebook Twitter Reddit Pinterest Tumblr WhatsApp Email Link