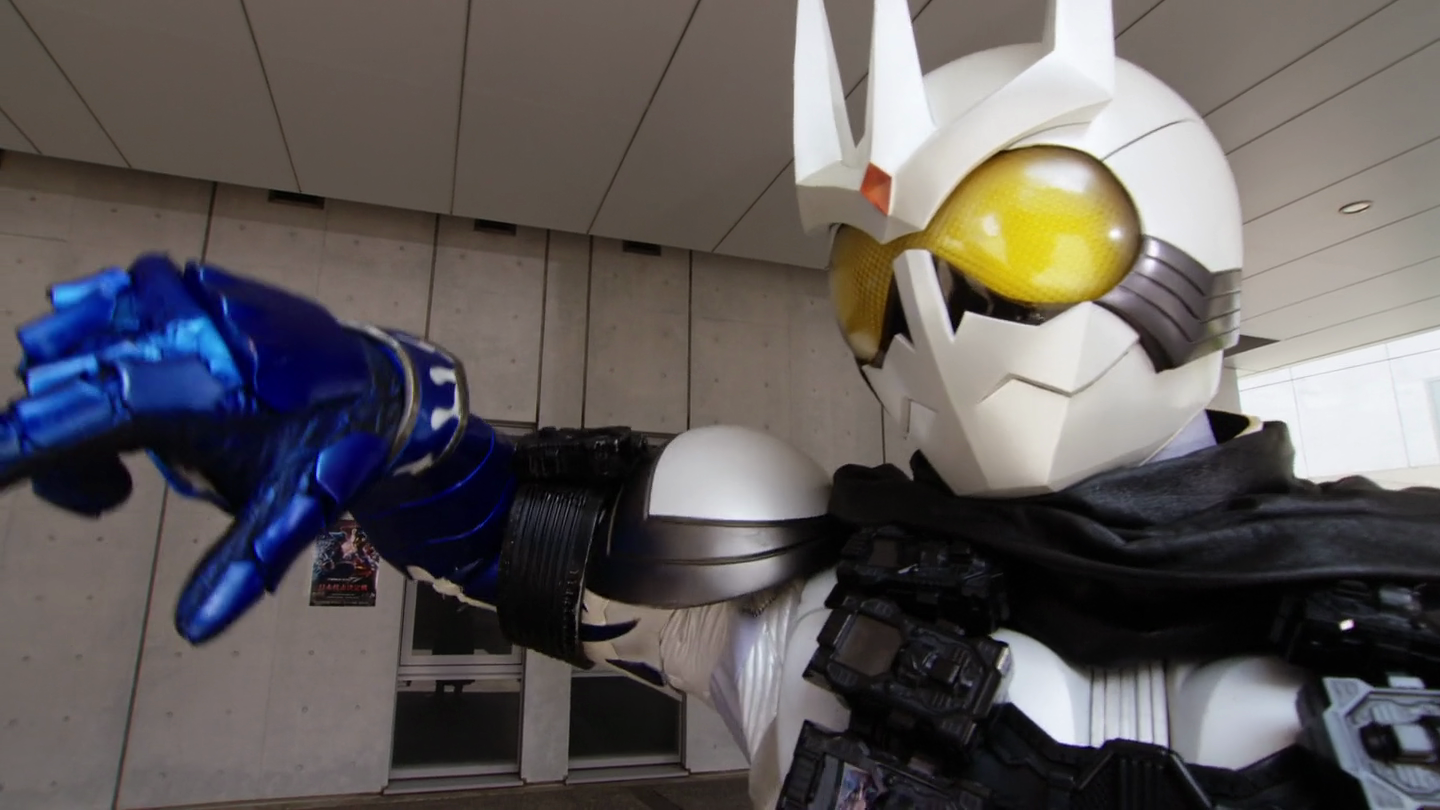 Time is eternal, my patience is not.

Welcome to the discussion thread for Kamen Rider Zi-O, episode 45; "2019: Eternal Party".
(Episode title's translation may vary depending on your fansub group of choice.)
This week: With Another Drive's identity supposedly revealed, Geiz argues with Sougo over both trusting Heure and Ora while questioning if he has any right to remain in the present. Meanwhile, Swartz recruits Kamen Rider Eternal to his side after spiriting Sougo's former classmate Owada away.

Hmm… So Geiz cannot shake off Destiny Shift, but Woz can? Toei, are you sure you didn’t get these characters mixed up?

So much to comment on, yet where do I begin?
Geiz and Sougo had their first fight as friends, and to think Geiz was willing to walk away convinced that Sougo is destined for something horrible, willing to let his last look at Sougo be one where he’s brutally killing a monster for revenge as Grand Zi-O. I’m just so surprised Geiz is willing to believe that coming to the past was all for nothing after everything they’ve been through.

I won’t talk about what’s going on with the Time Jacker stuff, because that’ll play out along the way (though I like to think this Another Drive was born from putting Another Watch in a blank Roimude body that may have been lying around in a police storage unit or something). But I will say that even though it took two episodes to defeat the MOTW as per usual, somehow this just felt different. Sougo didn’t feel like his usual hero or kingly self. For the first time, I saw the seeds of Oma growing in his anger. I know it won’t last, but honestly, this is why Geiz and Tsukuyomi need to stay. This is what happens if Sougo never has anyone to fight for.

I’d like to add that Heure’s death was more meaningful than the death of Sougo’s childhood crush from the Kiva arc. Every once in a while, an episode in a TV series comes along that is so engaging, it feels like you’ve been watching for hours even though it was only 25 minutes. For me, this felt like one of those moments. And what a way to end it; by bringing back that White loser one more time.

Another Drive call himself Paradox Roidmude and have two core no.108. I believe this one tied to movie. Honestly she came out nowhere, even though in Drive series itself, there is many other Roidmude still hide themselves like Lupin. I still not watch movie yet but I'm lean to believe it is just random insert to make series and movie look like have some sort of connection.

About Woz, his Ginga power is full of plot armor. There is no explanation about his power. I even can't understand why he must have Taiyou mode and Wakusei mode aside from his Ginga Finally mode. Can't it be just one form? Except when he unleash special attack, there is no difference between those three form. Also just make him final boss already. Another Decade was very boring as big villain.

Hey, there's no keeping my boy Tsukasa down! Loved when they played some of his BG music too.

Hangyakuno said:
Another Drive call himself Paradox Roidmude and have two core no.108. I believe this one tied to movie. Honestly she came out nowhere, even though in Drive series itself, there is many other Roidmude still hide themselves like Lupin. I still not watch movie yet but I'm lean to believe it is just random insert to make series and movie look like have some sort of connection.
Click to expand...

I don't know whether it connect to Zi-O's summer movie, but it sure connects to Drive's. The Paradox Roidmude was Kamen Rider Dark Drive. The "Another Drive" label is being used very literally here lol.

So, along with Eternal and Aqua, we have a movie Rider theme. Also like Eternal, it was killed in it's movie and presumably Schwartz has resurrected it using one of these Another World thingys.

In the Drive movie it came back in time to try and merge with it's past self, creating a paradox (hence the name) which would cause a Global Freeze. It was mentioned that Schwartz's resurrected Riders are from alternate timelines where they won their battles, so I guess this version of the character was successful, which is why there were two "108" numerals when it was destroyed.

It spent most of Drive's movie disguised as Shinnosuke's son, who it had originally stolen the Driver from. So they reused the ability here, only with Hora's actress rather than bringing back another actor. I guess the reason we don't get to see it in it's default Roidmude form is because it's original voice actor is the same guy who now voices Oma Zi-O, so they were probably worried people would get confused if a random MotW showed up sounding the same.

So yeah, kudos to whoever went above and beyond with the continuity of this minor character lol.
Last edited: Aug 6, 2019

Toku Prime said:
So yeah, kudos to whoever went above and beyond with the continuity of this minor character lol.
Click to expand...

And props to you for catching all that! I completely forgot about Surprise Future. I only remembered the Drive team recovering a blank Roimude and locking it up somewhere, might have been in a Gou/Mach focused special. Personally, I blame Drive for having so many extras. It's not only been a few years, but it was hard to keep up with all of it.

SamuraiEchidna said:
And props to you for catching all that!
Click to expand...

Oh I'm not even going to pretend that I remember the Drive movie in that much detail. When I heard "Paradox Roidmude" it rang a bell so I paused the show and read the character's wiki entry before continuing. Otherwise I wouldn't have had a clue.

Still, it makes me wonder how many other references I might've missed in this show from not having all the details on past characters fresh in my memory.

I didn't even like Drive, and I still remember the Paradox Roidmude being two 108s. And you don't have to worry, Toei's only good at making continuity matter on things that aren't relevant in the overall sense just so that people who are part of the fandom can pat them on the back for remembering irrelevant details. There's not a lot in Zi-O that even has those details in mind.
You must log in or register to reply here.
Share:
Facebook Twitter Reddit Pinterest Tumblr WhatsApp Email Link