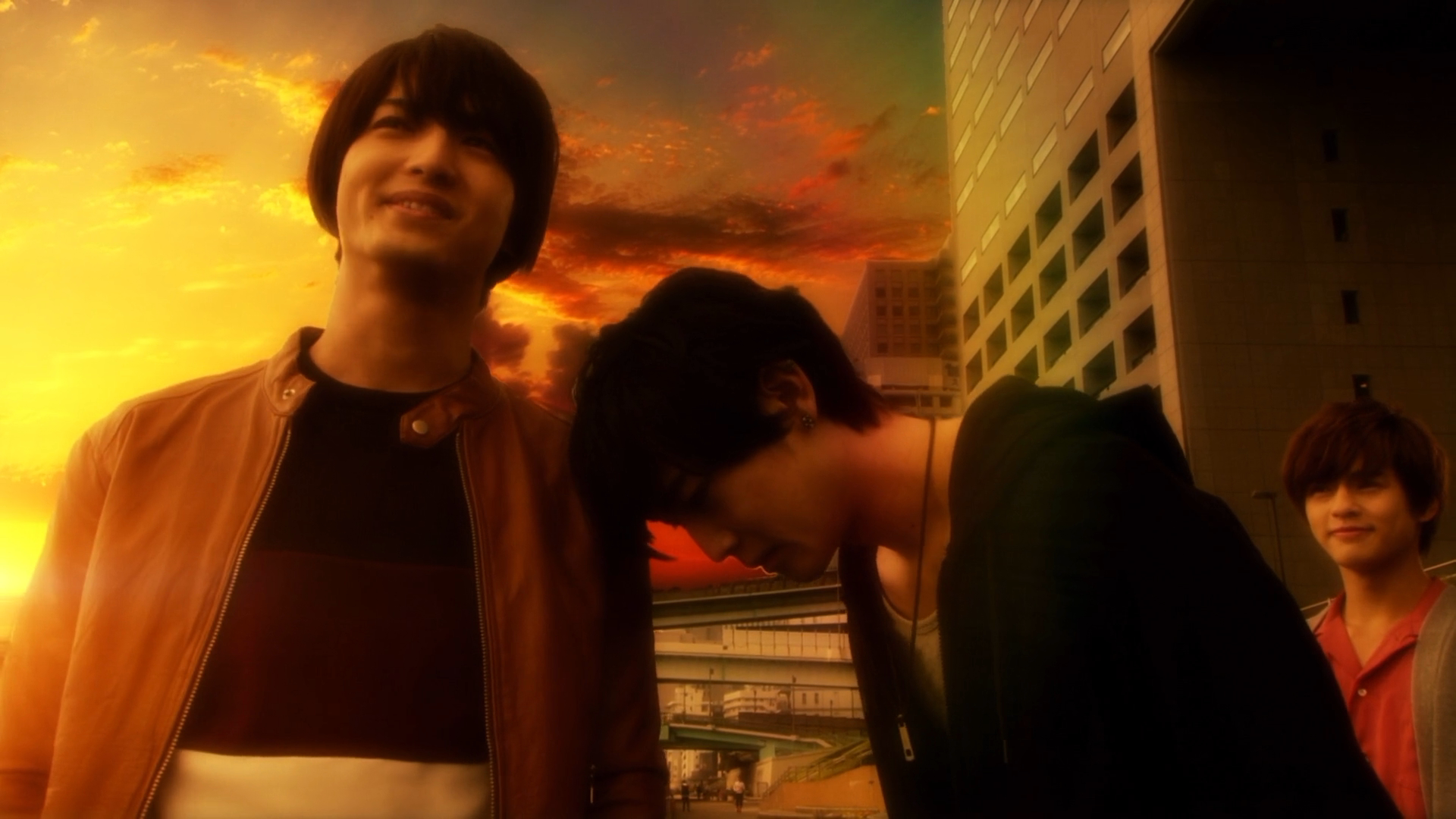 Hit the beat; turn back the clock.

Welcome to the discussion thread for Kamen Rider Zi-O, episode 34; "2019: Heisei's Oni, Reiwa's Oni".
(Episode title's translation may vary depending on your fansub group of choice.)
This week: As Sougo's birthday arrives, he approaches Kyosuke Kiriya for Kamen Rider Hibiki's powers, but the latter reveals that he had never truly surpassed his teacher.

The highlight for me had to be Todoroki's brief mention of Hinaka. Hinaka is one of my favorite female characters in the entire franchise and her actress sadly passed away (I think due to a heart problem?) a couple of years after Hibiki ended, so it's great to see them acknowledge her. Todoroki and her had a very on-and-off romantic relationship during the show, and it sounds like they are still close in some way. I thought it was lovely.

It was also nice to see Todoroki reference Zanki (though less emotional given that his actor is going to be in the very next episode reprising a different role).

It was a little weird to see them constantly refer to (the real) Hibiki in the past tense, almost as if he had died or something. Clearly that's not the case (Sougo referenced having met him - presumably in the last crossover film - in the previous episode) but you got the impression that even Todoroki had lost touch with him.

I must admit, the moment when Hibiki's opening theme kicked in was great. Yes, yes, it would have been better if we'd caught up with Asumu (In my head he's become a doctor, and they end the two-parter with a 'Shonen Yo' walk through a hospital corridor, ending with him talking to a child patient, and I'd have probably lost my shiz!) but having Kyosuke confront someone who hero worshiped him just as he had hero worshiped Hibiki in the show, and so forces him to learn a little humility in the process, wasn't a bad way to go given actor availability.

Complaints? Well, while Woz is inherently a goofy character I think he's at his weakest when they force him to be the comic relief like this. I do wish Sougo's uncle had more to do than just cooking meals for people who inevitably walk out without eating them. Finally, the Hibiki suit is one of my favorite designs in all of toku, and yet most of it's appearance here was in a dark warehouse. I'd have loved if they'd taken it outside so we could see it better.

Toku Prime said:
The highlight for me had to be Todoroki's brief mention of Hinaka.
Click to expand...

I was hoping for a mention of Asumu by Kiriya, but the Hinaka reference was a surprise, and touching. It HAS to have been an ad-lib by Shingo Kawaguchi, because I can't imagine the Zi-o writers thinking to do it.

I'm anti-Kiriya, when it comes to the original Hibiki series, but I feel like this episode ended up copping out on what it seemed like it was going to do. On one hand, I like that it tried to address and fix that blunder of a Hibiki finale by having Kyosuke decide to pursue his own way, but on the other...the ideas were there to get you to accept Kiriya as the new Hibiki, and that would have been a bolder choice. But I guess that the production is not only optimistic about getting Hosokawa back one day, but maybe even Tochihara and having a real continuation of those characters' journeys.

Watching future generations of the Oni Riders get less physically built and get more pretty-boy-ish is like watching the Jojo family line unfold through the ages... Except with less neon colors, and no English songs to end the episodes.

To me, this conclusion was not very exciting... The whole thing just dragged its heals with Kiriya wanting to save his student. I was hoping that eventually, he'd have a breakthrough. Maybe become a more relaxed, easy-going person like the original Hibiki. Maybe he'd realize that he can't save someone else if he can't improve himself first. Instead, Kiriya stays the exact same person through the whole episode, and is completely rewarded for it. No real character arc at all.

But I guess the one thing I can accept is that he genuinely looked up to the original Hibiki, wherever he is. When I watched the original series, I never got the impression that he genuinely wanted to be his disciple. I always thought he was becoming an Oni just to one-up Asumu. But without Asumu around, he basically had to let the rivalry go and grow up in his own right. And it's a little confusing that someone could lose their Oni powers to a Ride Watch since gaining it required intense physical training. Wouldn't the same training be able to unlock those powers again? Eh, I'm overthinking it. The show has a new pattern to its two-parters, and I don't want to break that pattern just for speculation.

Also, it was kind of nice to see that evening shot at the end. It wasn't perfect, it was filmed just a bit too clean, but it did remind me of the interesting ways they'd sometimes film the Hibiki episodes. They tried, at least.


Toku Prime said:
The highlight for me had to be Todoroki's brief mention of Hinaka. Hinaka is one of my favorite female characters in the entire franchise and her actress sadly passed away (I think due to a heart problem?) a couple of years after Hibiki ended, so it's great to see them acknowledge her. Todoroki and her had a very on-and-off romantic relationship during the show, and it sounds like they are still close in some way. I thought it was lovely.
Click to expand...

Now to me, this was the true heart of the episode. For kids, it'll fly right by. But for fans who have been following the behind the scenes stuff, this was a very nice send off. The writer/director of this episode might not have been involved with the first half of the Hibiki TV show, and I've heard rumors about people not liking shows they didn't personally create, but this episode still did some nice things to honor the Hibiki TV show that they didn't have to do. So hopefully any strong feelings remaining aren't too personal.

But I do have one big question to everyone (and I might be asking people of the wrong age since this is a kid's show, but I'll go ahead and ask)...
The biggest thing about episodes like this is that they should get kids interested in the TV shows that came before. Pretending you never saw it, would this episode make you interested in watching Kamen Rider Hibiki? Personally, I'm not sure it would. The costume design was good, but I just don't feel like the true charm of the show was here. The only thing that would have caught my interest was how Todoroki mentioned Oni Hunters.

SamuraiEchidna said:
Watching future generations of the Oni Riders get less physically built and get more pretty-boy-ish is like watching the Jojo family line unfold through the ages... Except with less neon colors, and no English songs to end the episodes.
Click to expand...

Somehow... I find this assessment to be inaccurate. The first three JoJos looked like they were on some steroids. I'm aware it's the aesthetics of how some mangas were in that time, but I don't really think this is well... the same. Even with some "pretty boys", they do have a wild and tough look to them. Others though? Yeah... completely just a pretty boy though.
You must log in or register to reply here.
Share:
Facebook Twitter Reddit Pinterest Tumblr WhatsApp Email Link