Dōbutsu Sentai Zyuohger, Episode 28: "The Return of The Space Pirates" 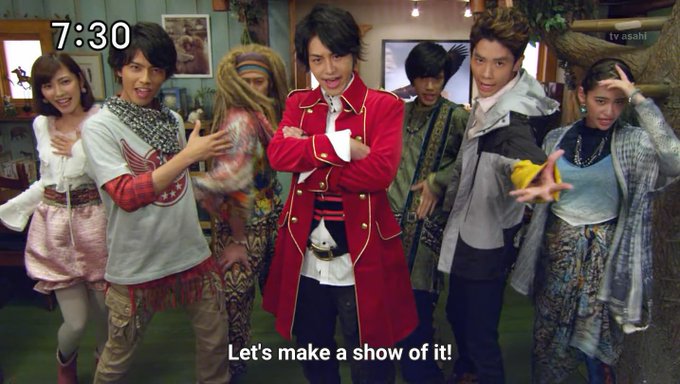 Nice pose tribute from Sela :thumbs:​
This week: those space pirates everybody's (once again) talking about, still no curry for Marvellous, a hologram message from Princess Whaleia tells the story of a monster I'm sure we'll never see again in this series *cough*, Gai scrambles to ask permission to use the keys, and man the Gokaiger's background music is awesome!
Last edited: Sep 10, 2016

Great episode, Marvelous is as cocky as always, and it's good to see the Gokaichanges again, I hope we will get more Gokaichanges next week aside from what we saw from the preview (*sigh* another all red transformation)
Also, I thought we'll get to see the ToqGer kids return but all we got in the end are just backshots of some kids dressing as ToqGers. I guess I should not put to much hope for an Akaranger appearance next week

The best episode of the series so far. I like the way it felt like a Gokaiger episode. The crew returns to Earth for another treasure and just so happens to encounter a pirate-looking monster and another Sentai. I wasn't expecting any Gokai Changes for this two part arc. It was so epic to see Gokai changes for not only preceding Sentai teams but successors as well. This episode confirms that all Rangers regardless of how long they'd been around, can fuse their powers into a Ranger key. So this really makes the Gokaigers the strongest Sentai ever. They can use the Ranger powers of the past and future. The All-Red Gokai changes are always used because it celebrates the Anniversary of Sentai. Can't wait for next week's episode.

hah, I was right. the Zyuohgers are still boring as ever. even this Misao dude is trying too hard to be funny, which is... well guess what, he isn't! also the fact that they have to use the Gokaigers finding the next greatest treasure as a plot device to introduce Zyuoh Whale tells me that the series can't seem to handle itself on its own (well they couldn't anyway in the first place).

on the plus side, yay Gokaigers! I've always wanted to see Marvelous return, but bringing back the entire package? I'll give you credit for that, Toei. it's nice to see the ToQger kids as well, but yeah, kinda obvious those aren't the same child actors. excited for Part 2 and after that, good riddance Zyuohger once again. :laugh:
D

I have no idea why there's so much shitting all over Zyuohger, it's seriously the best Sentai in years. The entire cast is likable for once, and there's a sense of restraint we haven't had out of the franchise since, well, Gokaiger. I mean, it's not saying much, but I'm glad to be watching a new Super Sentai that isn't actively irritating me.

Anyways, on to the episode:

This was fun. Captain Marvelous once again steals the show, but we got some pretty cool backstory of Zyuland that I didn't expect. So Bunglay is after a Mega-Beast. Does that mean we can expect Juspion to show up soon?

I like that Cho is also voicing the Whale Zyuman. Considering he also plays Brook in One Piece, I like to think that's an in-joke considering Brook's bond with Laboon.

Gai's little scene with the "ToQgers" was a fun sight gag, and I still love the way how Marvelous manhandles Navi. Got some serious chills during the appearance of the other Gokaigers with their dramatic theme playing, and the ensuing fight was a lot of fun with some great stunt work peppered in there.

Listening to the new version of "Super Hero Getter" a second time, it sounds a bit better but it just doesn't have the same catchiness that the original version had.

Is it next Sunday yet?

DaikaijuSokogeki! said:
I have no idea why there's so much shitting all over Zyuohger, it's seriously the best Sentai in years. The entire cast is likable for once, and there's a sense of restraint we haven't had out of the franchise since, well, Gokaiger. I mean, it's not saying much, but I'm glad to be watching a new Super Sentai that isn't actively irritating me.
Click to expand...

So far, the only person I've seen that seems to hate Zyuohger is this Jacky guy and like two-three comments over on Jefusion very early in the run. The general consensus has been positive so far. But whatever, he'll be gone after the next episode. So good riddance.

Anyways, this episode was good.

- I felt like everyone involved had some story in this episode... expect for the 4 other Gokaigers, but they were awesome none the less.
- I wonder if Toei and Bandai picked a Whale to be this ultimate power based on getting the Gokaigers back or whether just because it's a really big animal.
- I really like Marvelous' changes this episode against the Zyuohgers and Bunglay.
- Did Leo get over his thing about hitting women because he seems to be going out on Luka.
Last edited: Sep 11, 2016

Complete side note - I noticed that when Naria bows to Genis, her suit actor hasn't completely sealed the helmet and it's slightly open. It kinda freaked me out the first time I was watching the episode. It looks a bit like some horrible injury, albeit without any blood. :O_O:

TheNoMoreHero said:
So far, the only person I've seen that seems to hate Zyuohger is this Jacky guy and like two-three comments over on Jefusion very early in the run. The general consensus has been positive so far. But whatever, he'll be gone after the next episode. So good riddance.
Click to expand...

hah, I'm not the only one out there who thinks so. you just don't see much of it on the Internet because people who don't like what others like (and vice versa) aren't allowed to have their own opinions. and I like how after so many years on here, I'm still mistaken to be a guy. flattering.

- lol Marvelous is "defeated" by a tickle

- So there's something gold kinda visible among big black rubble, and no one noticed? :sweat:

- The Whale Change Gun already has Eagle-Shark-Lion-Elephant-Tiger symbol on it since it was first created. That's one hell of a future prediction there :laugh:

- ....yeah, with how their face isn't shown, I have a feeling they choose to pay random kids to play as the ToQ kids. It's interesting how the ToQ kids are the only post-Gokaiger sentai alumni to show up, though. Maybe because hiring random kids is much easier :sweat:

- I like how Ahim fought a sword user using 2 guns.