If you grew up with Anime serials like Magic Knight Rayearth, Cardcaptor Sakura, Chobits, and the crossover, Tsubasa Chronicles, then you are already familiar with CLAMP. 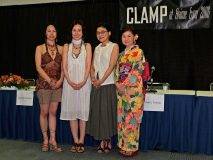 A group of female Mangaka from the late 1980s to early 2000s who created those classics. These women had been collaborating for decades to make mangas of diverse genres. Many of their works got adapted into Anime and movies.
They recently resurfaced after the Anime adaptation of Cardcaptor Sakura Clear Card in 2017. It is the direct sequel of Cardcaptor Sakura. This Anime is about Sakura’s life as a card captor in her high school years after she graduated middle school.
Now one of their obscure titles from the 90s with the cult following will have a full anime series adaptation. Tokyo Babylon 2021 will be premiering next year.
This dark seven-volume Manga got adapted into a two-episode OAV in 1992. Those...
Click to expand...

UK ISPs clamp down on file-sharers... is actually kinda funny

Tokyo Vice based from the True Story of Jake Adelstein