BATWHEELS
Batwheels is a Cartoon Network and HBO Max preschool superhero series based on the Batman Family from DC Comics. It follows the Batwheels, a team of AI-powered vehicles that transport Batman and his allies across Gotham City, and fight battles of their own. The series premiered as a pilot special on September 17, 2022 in the United States on HBO Max. The show made its Cartoon Network debut on October 17, 2022. 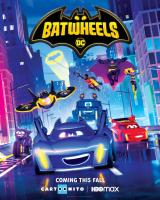 Last edited by a moderator: Nov 7, 2022
You must log in or register to reply here.