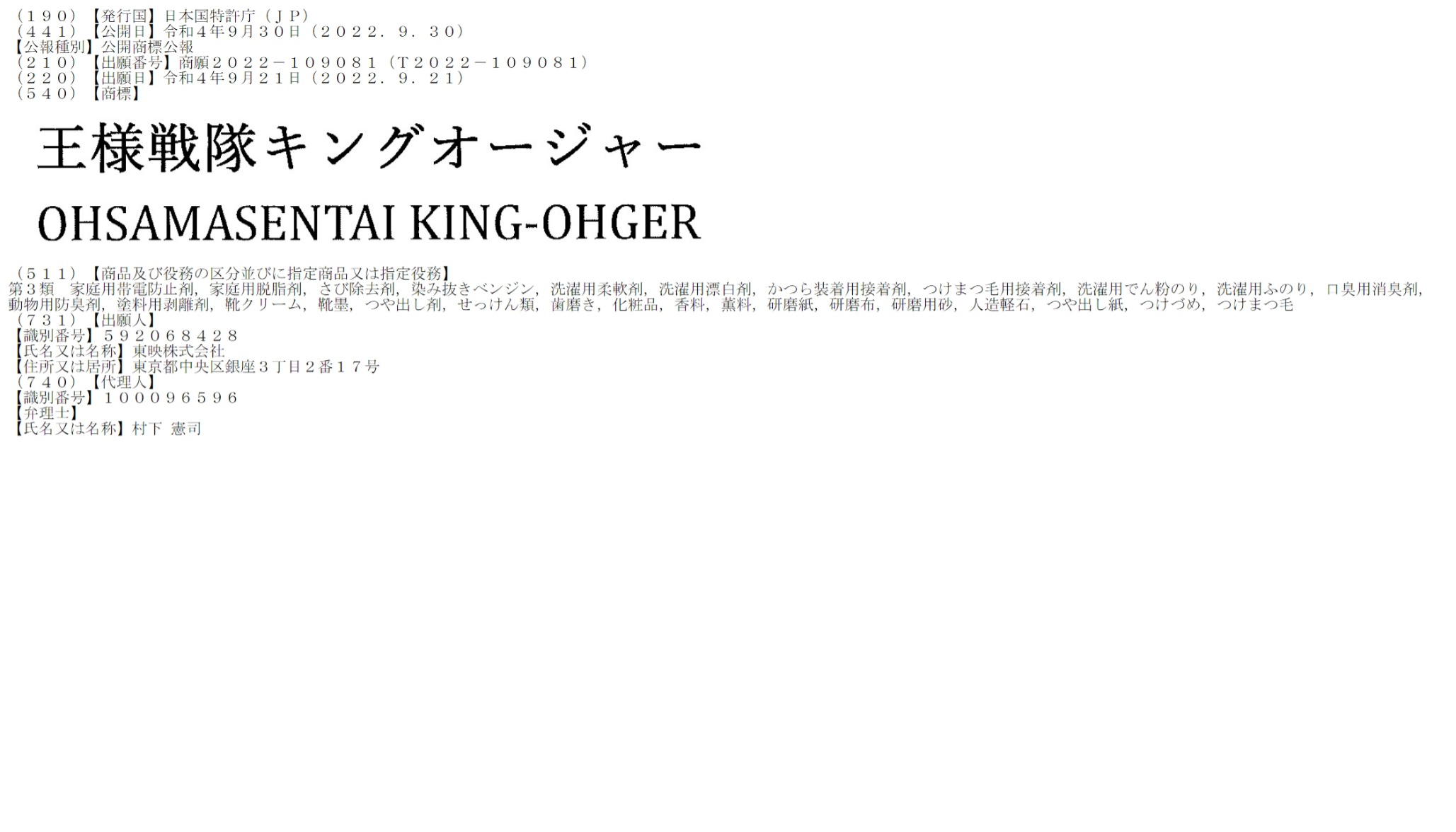 ​
Deep below the ground, an ancient and terrible creature slumbers. Only the most powerful of psychics can pierce the veils of it's mind to see the secrets within. But when the trademark bot stirs, it reveals a glimpse of the future to it's most fervent disciples.

You know the deal by now. We have this titbit of information. There won't be anything else until the second half of December.

Jokes about infamous terrorists will not be appreciated. Jokes about Kyoryu Red returning will be.
Last edited: Sep 29, 2022

Oh-Lord! Task Force King Oh! Ger! What a name. I guess its going to be like Shinkenger? The team works for the King?
D

That has got to be the most convoluted and complicated name ever in Sentai. lol

Speaking of "king", I remember back when Kyoryuger was airing, I remember few people were joking that show should have been renamed to
"King Sentai Daigoranger" or "Daigo Sentai Kingranger" or something similar to that, due to heavy focus on King/Daigo/KyoryuRed; 10 years later, we are getting "King" Sentai indeed.
Next year marks 10th anniversary of Kyoryuger... coincidence?

I just hope we don't get someone like King/Daigo for rangers; who I despise.

I'm curious who's the writer going to be.
If I were to guess, I think either Mouri or Yamaoka might be the head writer; if it's the king motif (which most likely has knight), then latter would fit very well.
It's also possible newcomer might be head writer, which I'm always welcome.

This might sounds controversial, but I wouldn't mind Riku Sanjo (Kyoryuger) or Takuro Fukuda (Kamen Rider Ghost and Saber) be head writer; though former would be iffy, since he's busy with Fuuto PI (Kamen Rider W spin-off anime) as Series Composition Supervisor.
Even though I'm not fan of Fukuda's Rider series (especially latter), I think he might have do better job as Sentai... maybe.

Ohsama is basically just another way of saying "king." Check out that first character being the same as the one making up Kingranger's visor.

It's a bit like a repeat of something like 'Mahou Sentai Magiranger.' Mahou is just the Japanese word for magic, so it's just the same word in Japanese and English.

I have a theory that either the Red or the sixth ranger will constantly talk about themselves as being an Emperor. After all, it's the only rank above a king. A king of kings, if you will.

I doubt Kyoryuger will get a full reunion, sadly, as Amy/Pink's actress retired a few years ago.

PowerPhantom245 said:
This might sounds controversial, but I wouldn't mind Riku Sanjo (Kyoryuger) or Takuro Fukuda (Kamen Rider Ghost and Saber) be head writer; though former would be iffy, since he's busy with Fuuto PI (Kamen Rider W spin-off anime) as Series Composition Supervisor.
Even though I'm not fan of Fukuda's Rider series (especially latter), I think he might have do better job as Sentai... maybe.
Click to expand...

Assuming that they didn't just award Sanjo a courtesy credit and he's actually doing work on the anime version of Fuuto PI, he would have finished on it long before it started airing so that it had time to be animated. But he's still working on the manga version and IIRC he's also writing another manga at the same time, so he might be too busy to juggle a toku show as well.

I wouldn't be hopeful about Fukuda as head writer at this point. IIRC when he was head writer of Ghost he didn't contribute as many episodes as a head writer normally would. He even mentioned this in the press conference for Saber, where he said his main goal was to write more of the show himself...so of course he actually wrote even fewer episodes of that series.

Yeah, I know the intent was to call it King Sentai King King Ranger, but my translation is better.

Wednesday at 10:50 AM
Ethan Kirchner

Wednesday at 5:47 AM
Jaspreet