I'm just hyped that T.M. Revolution is doing the Op.

I hope it's good. I honestly never understood the hype with TM Revolution. I mean, I loved their Gundam SEED openings, or some of them, but most of their other music felt pretty average to me.
K

Dr Kain said:
I hope it's good. I honestly never understood the hype with TM Revolution. I mean, I loved their Gundam SEED openings, or some of them, but most of their other music felt pretty average to me.
Click to expand...

How can you're not mention TM Revolution's work on Ruroni Kenshin?
It's one of the first japanese songs I've heard and still one of my favourites. The best song of that anime as well.

He also did a few excellent Sengoku Basara songs

His Abingdon Boys School stuff has a different feel to it, but I like most of it as well.
I wish Zero-One would get something akin to his (and Nana Mizuki's) Valvrave OP songs at least, but looking at sad excuses for opening themes Riders usually have these days, it likely won't happen.

Wasn't sure were else to put this but tvarashi put the first episode on their youtube channel, and as of now it's not region locked. So if you're interested check it out

Over Time has subbed it.

Ok, having just seen ep 2, we're now taking bets-- do we think they're waiting to introduce all three main riders before they have an opening theme sequence, or is this show trying to do an Amazons thing?

So as revealed by the opening sequence, the two members of MetsubouJinrai.net will be getting Rider forms. The leader of the pair, Horobi, will imaginatively be known as Kamen Rider Horobi.

The big news is that Horobi's suit actor will be "Mr Kamen Rider" himself, Seiji Takaiwa. Yup, he may have stood down from the main role but he couldn't stay away for long. 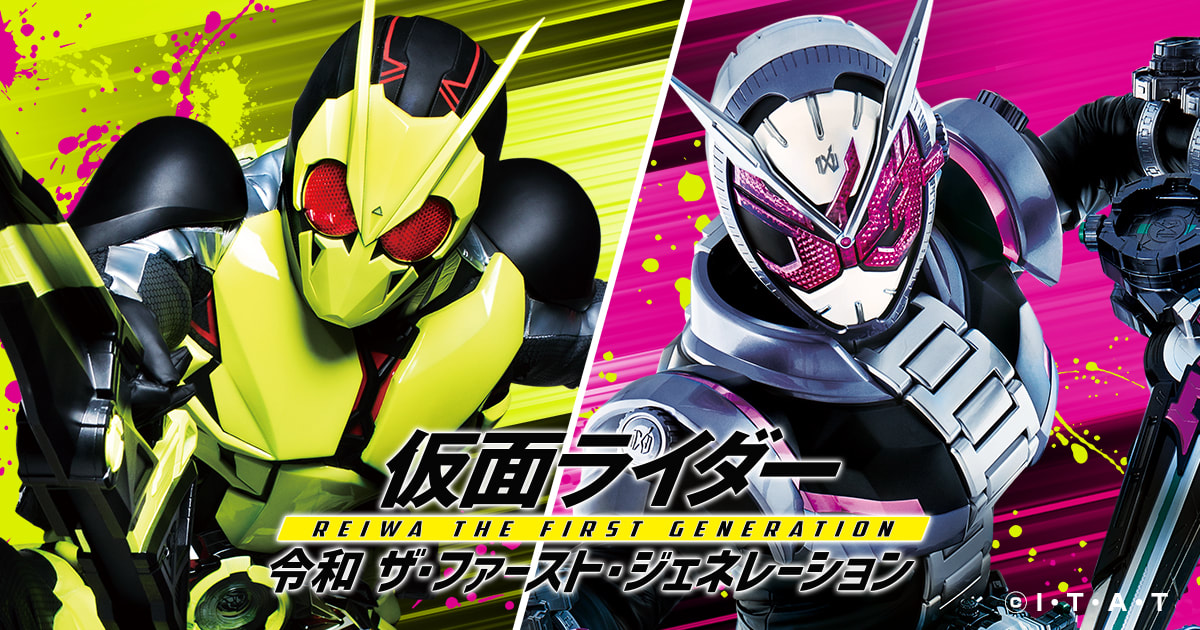 ​
So it's been confirmed that the next Rider film will be called 'Kamen Rider Reiwa The First Generation' and it will be released on December 21st. This is the expected annual crossover film, but it had previously been thought that the title would be "Kamen Rider Next Generations 2020".

So the first teaser trailer has been released for *takes a large breath* 'Kamen Rider Reiwa The First Generation!' It very prominently shows a new form for Zero-One. 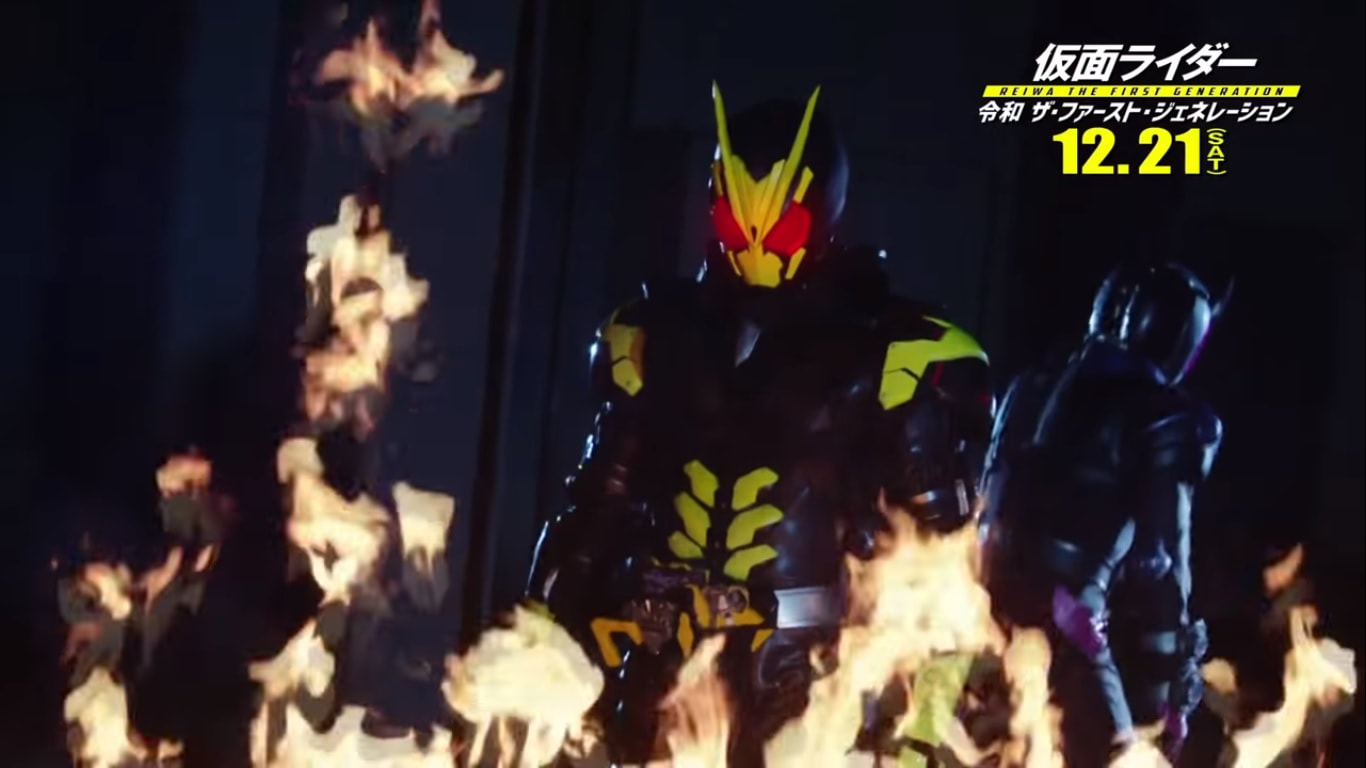 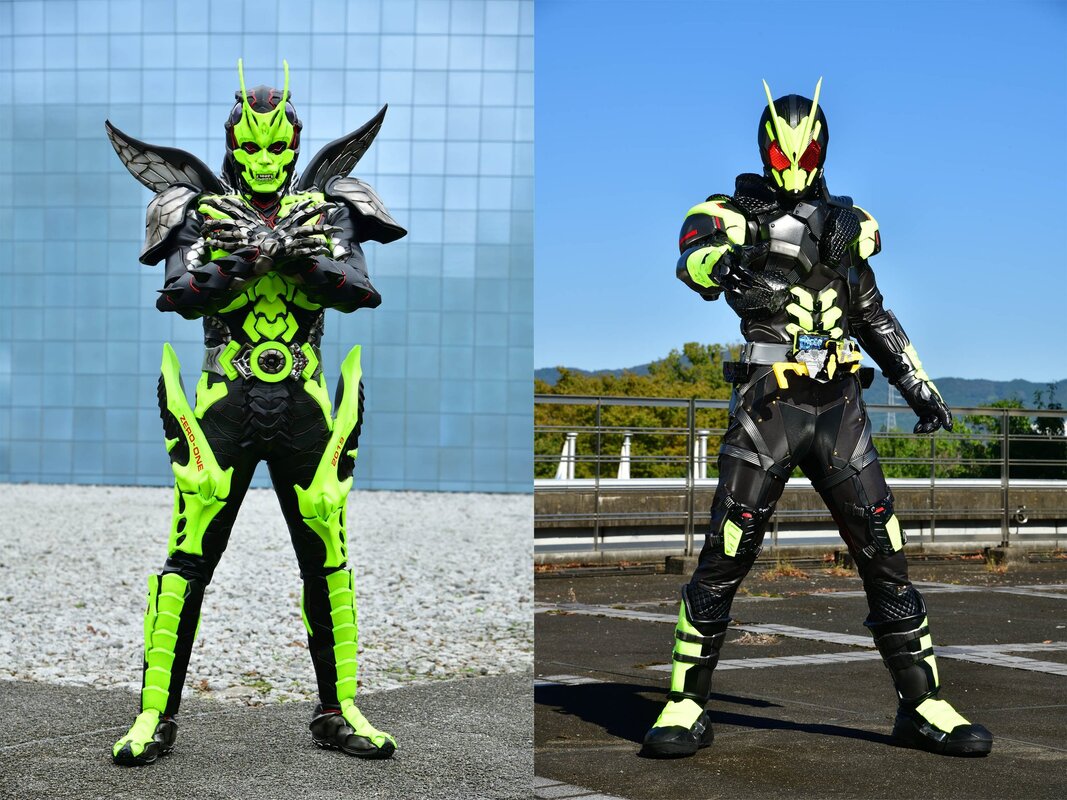 And again, on the right, alongside yet Another Zero-One!
​
It appears that one last Another Rider, Another Zero-One, escaped Zi-O's rewriting of time. As per the usual rules for Zi-O, only one version of a Rider's powers can exist at any one time. As such, Aruto finds that he can't authorise the Rising Hopper ProgRise Key and become Zero-One.

Somehow, Aruto will obtain one of MetsubouJinrai.net's ForceRiser belts and will use that to transform instead, becoming what is apparently called Kamen Rider 001 (Zero-Zero-One).
It looks like this suit (like many one-shot Rider suits nowadays) reuses many pre-existing suit elements; The upper thigh straps and upper chest armour pieces look like those found on both the Jin and Horobi suits, while the knee pads, shin guards and boots look like recolours of the same pieces on the Blood Stalk suit (and those shoulder pads look very round like Zi-O's).

I wonder how Aruto can use ForceRiser. It have thorn/injection aligned while strap around user waist. And when Progrise Hologram summoned, they attack user first before transform. I always thought that belt was for non human only. 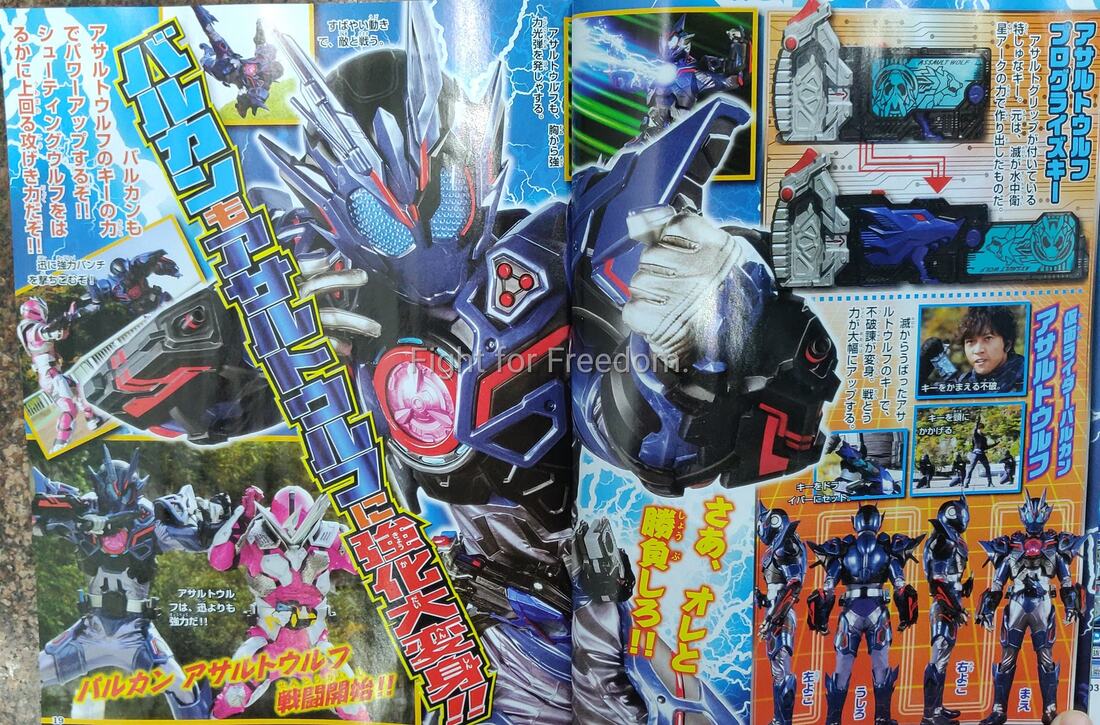 ​
I'm not going to post all the images of the new forms, but I did want to point out this one. This is Kamen Rider Vulcan's new Assault Wolf form...and for some reason it seems to have Rabbit/Tank antennae? What?

I never try to zoom out his antennae before and you are right, it is really Rabbit/Tank Antenae engraved inside. His hand cannon also look like Tank/Tank hand without caterpillar track. And his shoulder gatling/gun was look like upgraded Guardian.

Are they really reusing and mixing Build series armor and still can make this awesome form?

Hey, the site's back.

So, what all's happened with Rider in the last few weeks? I know the Zi-O movie finally got subbed & Thouser premiered. That's all I've got. Yeah, there wasn't much to the Zi-O movie, but I enjoyed it more than the show. It even kind of picked on itself a bit for the series &, as per usual, plugged the Zero-One- Zi-O crossover film.

I am a big fan of T.M.Revolution was the first time since back in late-2000's after the launch of YouTube.

Oh, & Zero-One got a new form-- Metal Cluster Hopper. I won't spoil anything, but I guess his armor is made of nanites that fly off his body in swarms & act & react to protect him against threats all on their own.

So we've now had official confirmation. Today's (May 10th) episode is the last new episode for at least this month.

The 'Presidential Specials' are recap episodes told from Aruto (KR 01) and Izu's perspective. The 'Shooting Special' is a recap told from Fuwa's (KR Vulcan) perspective.

To give some sort of reason for people to tune in, they have promised that the 'Presidential Special' will contain a bit of a sneak peak. I must admit I'd never noticed this before now, but apparently the opening sequence has always contained a shot of Izu with much longer hair and brown eyes (around about the "404 not found" line). Supposedly they are going to give some sort of hint as to what that's about.

They have said that there will be at least one other special episode further down the line, but they aren't revealing what it is quite yet. There is no set date for filming to resume, so expect more announcements for June when we get closer to the end of this month.
Last edited: May 10, 2020

Good god, clip shows? I hope Toei doesn't waste disc space and put them on their Blu-Ray releases as I would be pissed paying $300 for a Blu-Ray that includes at least 3 clipshows on it.

Welp the time has finally come for Rider to take a break. I wonder how will this affect the episode count of Zero-One and possibly release date of the next Rider show. Like would they try and cut the series short just to retain their current release schedule or we'll be seeing another W situation where the release date is shifted now?

raden238 said:
Welp the time has finally come for Rider to take a break. I wonder how will this affect the episode count of Zero-One and possibly release date of the next Rider show. Like would they try and cut the series short just to retain their current release schedule or we'll be seeing another W situation where the release date is shifted now?
Click to expand...