https://www.youtube.com/watch?v=I3G0emePHQA
No comments have been found at this time 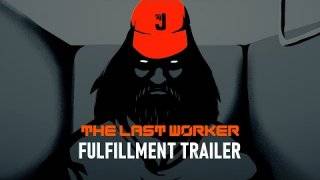 Like all leading online retailers with nothing to hide, CEO Josef Jüngle gives viewers a once-in-a-lifetime opportunity to tour the cutting edge, 650 million square foot JFC-1. Offering a sneak peek at the people, the technology, and the high-tech algorithms at the center of Jüngle, with products piled as high as skyscrapers, players can see first-hand that Jüngle delivers the future today.

About Jörg Tittel
Born in Brussels in 1978, Jörg Tittel is a London based writer, director and producer. His feature film debut THE WHITE KING starring Jonathan Pryce and Fiona Shaw, which he co-directed with his wife and production partner Alex Helfrecht, premiered at the 2016 Edinburgh International Film Festival, where it was nominated for the Michael Powell Award for Best British Feature. Besides writing and directing THE LAST WORKER, he is currently producing A WINTER’S JOURNEY starring John Malkovich. THE LAST WORKER is his VR debut.

About Wolf & Wood
Ryan Bousfield and his team at Wolf & Wood have created internationally recognised VR titles, including A CHAIR IN A ROOM: GREENWATER (2016), THE EXORCIST: LEGION VR (2018) and HOTEL R’n’R (2020) and have worked on all major VR platforms including HTC Vive, Oculus Rift, Oculus Quest, PlayStation VR and Steam VR. https://Wolfandwood.co