Face of Evil, a relentless horror film from writer/director Vito Dinatolo manages to show many different faces during its run time. What starts out as the tale of a jaded soldier returning home, quickly devolves into zombie survival tale, creating a disorienting experience that will definitely leave you unsure as to what twisted form of terror lurks around the next corner. Is the film for you? Find out in our Face Of Evil Movie Review.

As with most of my review assignments, I went into Face of Evil cold. I find that with zero expectations I can provide a more balanced assessment of the film on its own terms.

In fact, the only thing I knew when pressing play on Face of Evil was that Jamie Bernadette, who I have reviewed in the delightful 420 Massacre and the dismal Killing Joan had made her way onto the cast list so I was interested to see what type of character she inhabited this time out (more to come on what I found there).

Right off the bat though, the set-up felt dated. We are introduced to our main character Jay played by Scott Baxter as a soldier returning home after military service that has left him a dour, joyless person.

My opening statement is not meant to discount the experience of many brave veterans who are struggling with their return to civilian life, but rather to point out that had this film been produced 10 years ago the toll taken on our brave men and women by the war in Afghanistan would have seemed more poignant.

As Jay is greeted by a group of friends throwing a welcome home party, the film seems to shift into goofy teen comedy mode. Or rather it gets stuck between two gears.

While Baxter is still playing Jay as a broken shell of a man, we are introduced to the drunk slacker named Mike played by James Hutchinson doing a bad angry Spicoli impression and a slovenly home that looks like a hoarders paradise. These two elements I believe are meant to inject some humor into the film, but in reality are simply unpleasant.

The only bright spot in the the cast is the jovial Bob, played amiably by Bryan Howard. His naturally mellow delivery and twinkle in his eye go a long way in creating a likable screen presence. Unfortunately he is gone too soon from the proceedings.

Also wasted in the dramatic sense is the aforementioned Bernadette, who plays Jay’s concerned sister. Unfortunately she is plagued by poor dialogue, which is either intentionally rote as to play on horror tropes or simply the result of an unskilled screenwriter.

The whole setup feels unnatural, especially when Jay’s ex-girlfriend Jenny brought to life with gusto by Janet Roth shows up uninvited, immediately attempting to seduce him with awkward flirtations and gyrations. After sharing a drink from a bottle of middle eastern liquor brought home by the former soldier the action finally kicks in.

Soon there is a zombie demon on the loose in the house and Jay is grabbing a handgun and fighting to survive. Friends become infected, more zombies join the chase and what plays like a LARPING session convened by a group of House of the Dead enthusiasts changes the tone once again.

Now flashes of light revealing sneering zombie visages in the dark pulsed across the screen as the chase continued through seemingly endless hallways, but the results were laughable. Was this supposed to be a joke? It was all so unclear. Only 20 minutes into the film and with most of the cast now undead, I had no idea how the director intended to sustain this type of story.

It felt like someone’s parents were gone for the weekend so they decided to shoot a movie confined to a single location and what was amounting to someone filming a neighborhood haunted house maze was not winning me over. Luckily (depending on your point of view) Face of Evil was only getting started.

With Jay running from his pursuers, Dinatolo changes the focus once again by introducing the character of Sarge played by Chad Bishop, Jay’s former commander appearing out of nowhere with a ludicrous southern accent and conspiracy theorist bent.

As the pair took off down the highway I realized I was now being introduced to a watered down version of Zombieland without the charisma of Woody Harrelson or even Jesse Eisenberg. At least that film told us it was a comedy from the start, at 45 minutes in I was still confused as to whether I should be laughing or groaning at the antics on screen in Face of Evil. 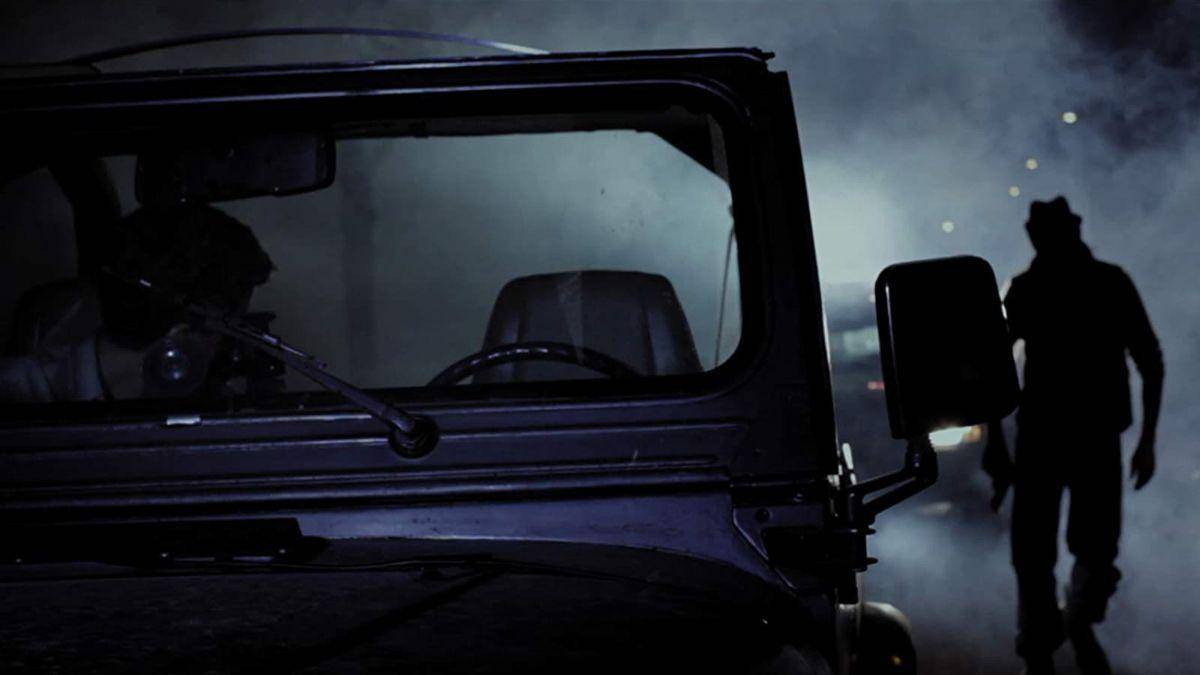 Sarge does provide some much needed, though clunky exposition about a zombie virus slowly infecting the entire populace, with the only immune individuals being soldiers who were vaccinated against it by the military. Luckily there was one bright spot on the horizon as the duo stop to make a phone call at a local bar.

There is a haunting song called “Kiss Me” sung by Raven Hughes in the bar that gives the scene a genuinely unnerving vibe. Her stilted delivery of the lyrics and dead eyed stare reminded me of Leeloo from The 5th Element after taking some very bad space acid. This echoing ballad heightens the tension as Jay is overtaken by a PTSD episode that leads to shocking violence.

Though truly the best sequence in the film, it felt out of place in this heightened reality, where sitcom style comedic dialogue was being peppered into a living nightmare scenario.

As a storyteller, Vito Dinatolo seems to lack some skill in keeping a consistent tone, but as a director of photography he provides several impressive visuals in the film’s final act. There are some beautiful shots of darkened streets as Jay and Sarge drive through a downtown cityscape strewn with infected individuals. The scope of the film’s locations and use of extras adds greatly to the production value, even if it doesn’t add up to a convincing story overall.

The final reveal and resolution is unfortunately rather predictable, though for some it might justify the inconsistent and episodic nature of the film as a whole. Presented as a straight dramatic piece by a filmmaker with a little bit more control over the themes at play, perhaps Face of Evil could have more of an impact, but in its current form it’s hard to stay on board for this ride.

Face of Evil is available now on VOD and DVD from Gravitas Ventures.

Prodigy Lands On Netflix August 22 Who Watches The Watchmen? You, On HBO