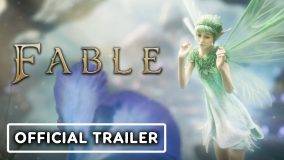 Microsoft and Forza horizon studios just released the trailer of the revival of a long-dormant franchise, Fable. Many fans thought this series is dead but they are all wrong!

The new trailer does not show any image of the main protagonist but it shows a comedic scene of a Small Pixie happily flying around an enchanted looking forest. The new trailer is told by a narrator that is talking about Legendary heroes and treacherous villains. The statement could be a clue to the alignment system of the original game. The fairy is looking like a joyful Disney character but she didn’t get a happy ending as she ends up getting devoured by a frog as the voice-over saying not everyone can get a happy ending, you can.

No gameplay is shown on the trailer as the game could still be under development.

The original game was first released in 2004 and it’s success spawns two sequels and three spin-offs. The first game was set on a world that resembles medieval Europe in the fictional Kingdom known as Albion.

Fable is one of those single-player RPGs where your character starts as a child and you will raise his skills and abilities until he becomes an adult. He was forced to live a hard life after he got orphaned by Raiders who attacked his village, killed his parents, and kidnapped his sister. This series is also known for its cheeky humor.

The player has the choice of what will be his alignment. You can make him good or evil based on your decisions. The game also let’s pursue romantic relationships both Heterosexual and gay long before Mass effect did it. How his story will end depends on your actions.

Fable III was the last game of the main series trilogy that got released back in 2010. So it has been a decade since the last time this game got a sequel.

The new addition to the series is titled Fable. Not Fable 4, Just simply Fable!
There is no clue whether this is the remake of the original or it is a reboot of the whole series. All that matters is that this series is back!

There is no footage of the gameplay at this moment. That doesn’t stop fans from all over social media to hype and feel stoked. There is still no information on what features of the past games will return and what new things will be introduced.

Fans are hoping that the new game will customization from hairstyles to weapons. Most of the games always had male Protagonists, so some fans want a female option as well.

This series also let us choose alignments between good and evil but a gray area should be explored. Not all things should be a choice between black and white. Some fans wanted an improvement with the combat system. Another flaw of the past games is that the evil route is less dynamic. The gameplay had always been more complex as a hero.

Some of the choices we make in the past games don’t have any consequences. It has something to do with the limitation of the technology back then. I hope a small decision in the game could have a huge impact we never expected. This game is known for replay value after all. I believe the next-gen will have a more sophisticated engine that can handle all possibilities.

Everyone has high expectations for this game and let’s hope they can deliver.

Brie Larson is nominating herself to play Samus Aran on a Metroid Live action movie. Contra: The Board Game Reports For Duty In 2021

The Covenant by Guy Ritchie