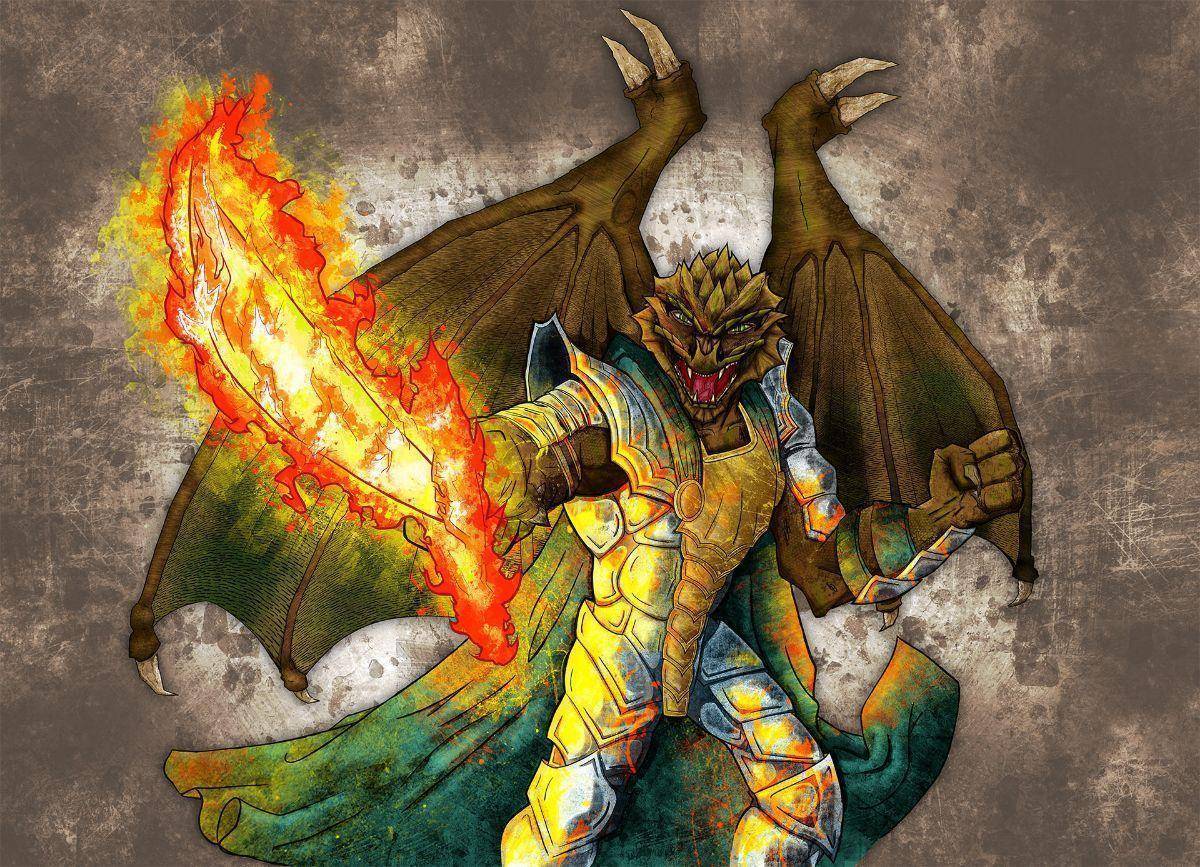 Last time, we talked about magic and its place in D&D.  This time around, I want to talk about my absolute favorite race to play in D&D:  The Dragonborn. Those of you that are fans of Elder Scrolls have heard that before, but in D&D, Dragonborn are humanoids that have a strong bloodline connection to the most mythical of creatures.  Tall, strong and scaled, the Dragonborn are not only great warriors, but their bloodline can help them tap into magic as well. Everyone who plays D&D has favorites and Dragonborn are hands down mine.  In fact, these articles wouldn’t even exist without the Dragonborn.

Several years ago, I got divorced.  As a result, I went through a bit of a funk.  I tried to fill my time with new experiences, the first being Improv classes.  I had always wanted to be on stage performing for people and these classes allowed me to do that.  It was a life changing experience, one I highly recommend people try at least once. Anyway, as I delved more into Improv I wanted to find as many outlets to practice.  I was walking through a bookstore, searching for ideas when I saw it: A copy of the 4th edition D&D Player’s Handbook. I had fond memories as a kid playing 2nd edition but had drifted away from the game in my teenage years as music, movies and girls took up more and more of my attention.  The Handbook caught my eye mainly because of what was on the cover: an armor-clad warrior with the head of a dragon! I sat right in the isle and read through the book, quickly reigniting my interest in rolling dice and going on adventures. I found some people on Meetup who needed a player, and over the next few years worked on cultivating a community of players/DMs that is still going strong today.

So, what are Dragonborn?  Well, their roots began in 3rd edition, where humanoid dragon species were popular enemies to throw at players.  Naturally, players were all like “I wanna be a dragon too!” so D&D was all like “Ok, next edition ya’ll gonna be dragons!”.  In fact, Dragonborn are the very first race option in the 4th edition Player’s Handbook (page 34 to be exact). Over the years (and across now 2 editions) the lore of Dragonborn has grown, but basically the Dragonborn are mortal, humaniod descendants of chromatic (colored) or metallic dragons.  They are large, strong and loud. Their draconic blood craves adulation, so Dragonborn are very prideful and focused. Dragonborn fighters strive to be the perfect weapon, true masters of armed combat. Dragonborn sorcerers crave the most powerful magics, to channel their ancestors’ power into feats of arcane might that will be written into the history books.  Sometimes, their pride and focus lead them down dark paths, making them foes to be feared. They can, as allies, inspire their comrades to greatness and become trusted moral compasses also.

So, basically Dragonborn are the bee’s knees.  In 5th edition, because of their racial stat bonuses in Strength (perfect for fighters) and Charisma (there’s a type of Sorcerer tailor made for them) they are very versatile.  Heck, Paladins are Strength/Charisma builds so Dragonborn are a perfect fit. When you put your character together, you get to choose what type of dragon your bloodline is connected to.  Based on this bloodline connection, you gain two really great traits: resistance to a type of damage (fire for red, lightning for bronze, etc) and the ability to exhale a burst of that element all over your enemies.  One of my few issues with 5th edition is their treatment of the Draonborn’s breath weapon (I feel it’s a bit underpowered) but it’s a minor issue that can be easily tweaked by talking to your DM. Even without any tweaks, running around the world fighting evil as a dragon-man (or woman) is, in my opinion, what D&D is all about.

As I mentioned, there are alot of versions of the Dragonborn.  In the Player’s Handbook, there’s a handy chart for the basic metallic/chromatic dragons and the options these bloodlines provide.  To take your role playing to the next level, research the different personality/physical traits of the different dragons and add some of those traits to your Dragonborn.  In addition, if you want to go spellcaster with your Dragonborn, there’s a type of Sorcerer that further links your player to their draconic bloodline. Dragon Sorcerers have slightly higher defense and can even grow wings as they gain levels, using the magic in their blood to harness their ancestral power.  As I mentioned, Dragonborn are tailor made to be Paladins, holy warriors that can smite their enemies, heal themselves in battle and protect their allies. My favorite character of all time is Quimby, the Bronze Dragonborn Vengeance Paladin. I had so many good times being the constant, reliable foundation in what ended up being a pretty chaotic campaign.  I even got to be the defence lawyer for one of my party members! He was then known as Quimby, Undefeated Dragonborn Lawyer!

There are several races in D&D, with more being added as time goes on.  I’ll be talking about some of the others, but I had to start with my favorite.  So, check out the Dragonborn section of the Player’s Handbook and see if anything triggers your imagination to create a kick ass character.  Also, full disclosure: I almost called this article “Racial Profiling”. I quickly realized that would be a mistake, but you have to admit it would make a good title for a series of articles about the races in D&D……

For Those About To Roll, We Salute You! DM Tips: Putting...