Devil May Cry Cartoon Announced, From The Makers Of Castlevania Cartoon

It was late last month when Adi Shankar, producer of Netflix’s Castlevania anime series, announced he was picking up the rights to another video game with plans to cartoon-ify that as well. He dropped the hint with this Instagram post: 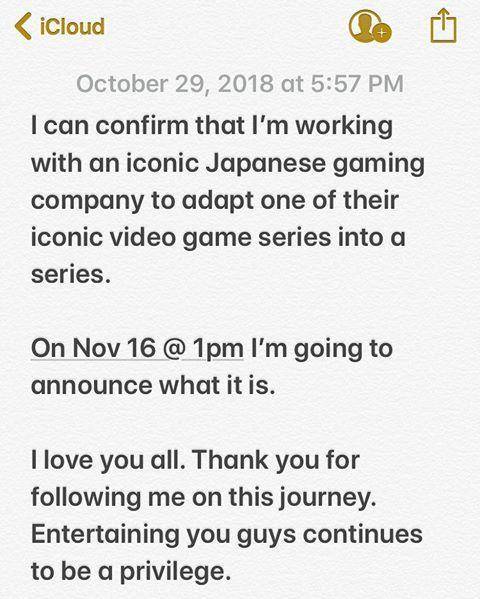 Reaction from the press was immediate:

Producer Adi Shankar is in talks to produce a series based on the long-running “The Legend of Zelda” video game franchise, TheWrap has learned exclusively.

Created for Nintendo by Shigeru Miyamoto and Takashi Tezuka, “The Legend of Zelda” debuted on the Nintendo Entertainment System in 1986. Followed by more than 17 sequels and several remastered release, the “Zelda” franchise has sold more than 80 million copies worldwide.

In most incarnations, the series follows the adventures of a wandering hero named Link, who must collect magical artifacts to save the princess Zelda and defeat an evil wizard named Ganon.

When reached for comment, a Nintendo spokesperson said, “We have nothing to announce on this topic.”

November 16th at 1 PM has passed, and Adi has revealed….a Devil May Cry series! Womp womp.

Now that we know what series Shankar wants to adapt next, it’s sparked a debate over whether he’s the right guy or not. Adi is mainly known for his dark and gritty takes on iconic properties, whether official (Castlevania) or unofficial (a gritty Power Rangers fanfilm he once made for YouTube). Devil May Cry is known for being an intentionally silly, way-over-the-top action slasher fest. Dante isn’t the brooding emotional type.

Oddly when everyone believed The Wrap, there didn’t seem to be a debate over whether Shankar was the right fit for Zelda.

Right now Shankar just has the license…the project doesn’t have a home as of yet. Shankar is shopping the show to different outlets. It’s possible Castlevania and Devil May Cry could wind up on separate streaming services. Or maybe CBS will take the latter….

Ride or Die: The Importance of Teamwork in D&D – For Those About To Roll, We Salute You! Marvel’s Agents Of SHIELD Picked Up For A Seventh Season