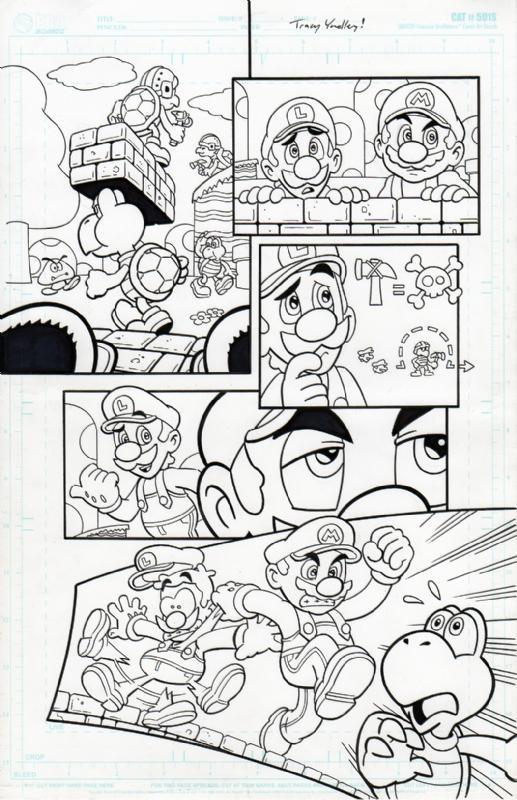 A few years ago, back when Archie Comics hadn’t bungled their Sonic contracts yet, the long-running comic starring the Blur Blur was their best-selling title. Responding to demand, they worked a deal with Capcom to launch a Mega Man comic, and then looked into partnering with Nintendo to do the same with Mario.

That last one didn’t happen, but a fully inked page from the comic’s pitch made it online in 2015. At the time, it was all we had to go on, but this week writer Ian Flynn shared the full details of the proposed plot.

The pitch to Nintendo was for a four-part miniseries that, if it performed well, could be expanded into an ongoing. The plot Ian came up with was a loose adaption of the first game: Bowser has attacked the Mushroom Kingdom, he’s kidnapped Peach, and only the Mario Brothers can save the day. Flynn added a few narrative twists and motives to flesh out the basic plotline.

It started off with Mario & Luigi being summoned to Peach’s castle for a plumbing job. Luigi was excited for the career-defining contract, Mario less enthused – a job’s a job & he’s bored of their career. They arrive just after Bowser has ransacked the Mushroom Kingdom.

With literally no one left to save the princess, Mario jumps at the call to adventure. Luigi less so. They stock up on what power-ups are left after the invasion and embark on a journey through Worlds 1-8, burning through their provisions since they’re novice heroes

They reach Bowser’s Castle in W8-4 and Luigi calls it quits. This is suicide. They’re PLUMBERS, not heroes. Mario refuses to give up – too many are counting on them. They part ways, Mario storming the castle.

Mario makes his way past the traps and firebars to his first showdown with Bowser. The King of Koopas wants to know who’s been causing so much trouble for his troops and it’s…this pudgy guy? Oh well. Anyone who challenges him meets the same fate.

It’s a knock-down, drag-out fight on the bridge over a magma moat. Mario is too nimble for Bowser to land a solid hit, but Bowser is too tough for Mario to actually hurt. They’re at a stalemate when a scream is heard, building from deep in the hall…

It’s Luigi, screaming in blind terror, running thru the castle as fast as he can. Over the bridge. Past the baffled combatants. Into a wall. Which knocks loose the decorative axe. Which cuts the bridge.

Mario bounces off the falling Bowser to safety. Mario and Luigi reconcile – yeah, Mario may have gotten in over his head, but Luigi could never abandon his brother. Together they rescue Peach who shares a bashful love-at-first-sight moment with Mario.

The trio returns to the Mushroom Kingdom and begin to rebuild. Peach names Mario & Luigi royal plumbers. Luigi is overjoyed – they’re set for life now! No more adventures! Cut to the stinger ending of Bowser crawling out of the magma moat.

From what Flynn heard, the proposal was greeted with enthusiasm at Nintendo of America, but stalled out once it reached Nintendo of Japan. “Looking back on it now,: says Flynn, “it’s not how I’d approach a Mario project today – too much drama, not enough whimsy.”