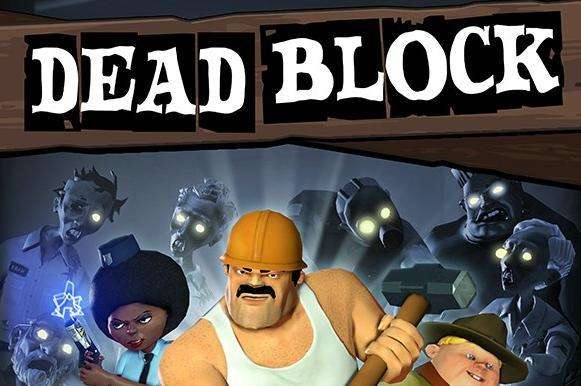 Set in the U.S. during the idyllic 1950s, Dead Block takes players to a simpler time when a gallon of gas cost a few pennies, the “golden age” of cinema was in full swing, and that new (and apparently insanely evil) craze called rock ‘n roll swept the nation—and caused an apocalyptic musical plague to turn the deceased into the walking dead!

The three survivors of the shuffling zombie onslaught – Mike, Jack and Foxy – hide in shelters around town and fortify their area by boarding up windows and setting a variety of unique, entertaining traps like the Cardboard Trap that makes zombies attack each other or the Freeze Trap that causes them to break into pieces.

Players collect items and power-ups while taking on zombies one-on-many with a variety of upgradeable weapons like Nail Guns and Hamburger smart bombs, and even rock the undead to shreds with awesome guitar power! The game offers 10 single-player levels as well as a 4-Player, split-screen multiplayer with an additional eight co-op levels where players can fight side by side with their friends.