Cryptozoic, manufacturers of fine collectible figurines and tabletop games, would like to do something to help the victims of the recent earthquake in Puerto Rico, and they’re enlisting Harley Quinn to help them do so. (No, not Kevin Smith’s daughter, the real one.)

Many years ago, Paul Dini was writing the script for the Batman The Animated Series episode “Joker’s Favor” when he thought it might be fun to introduce a “henchgirl” character to his team. He immediately thought of his friend, actress Arleen Sorkin, and her current gig playing circus clown Calliope Jones on the NBC soap opera Days Of Our Lives. And history was made, giving birth to one of DC’s most popular characters.

Bringing us to today…Cryptozoic is giving away five Harley statues in a public auction, and they’ve enlisted Dini’s help in getting them to move. He’s inked his signature on the boxes of all five, and they’ll each be sold for a period of one week beginning January 30:

“At Cryptozoic, we believe in helping our local, national, and international communities whenever we can,” says the company. “Proceeds will be donated to World Central Kitchen, which has been helping Puerto Rico since Hurricane Maria in 2017, making sure residents get hot meals as part of their #ChefsForPuertoRico movement. The charity has been on the ground helping relief efforts after the massive earthquakes in Puerto Rico earlier this month, and we’re doing what we can to help.”

The auctions will go live on this page, but you can also search eBay on the day of launch, which is again January 30. 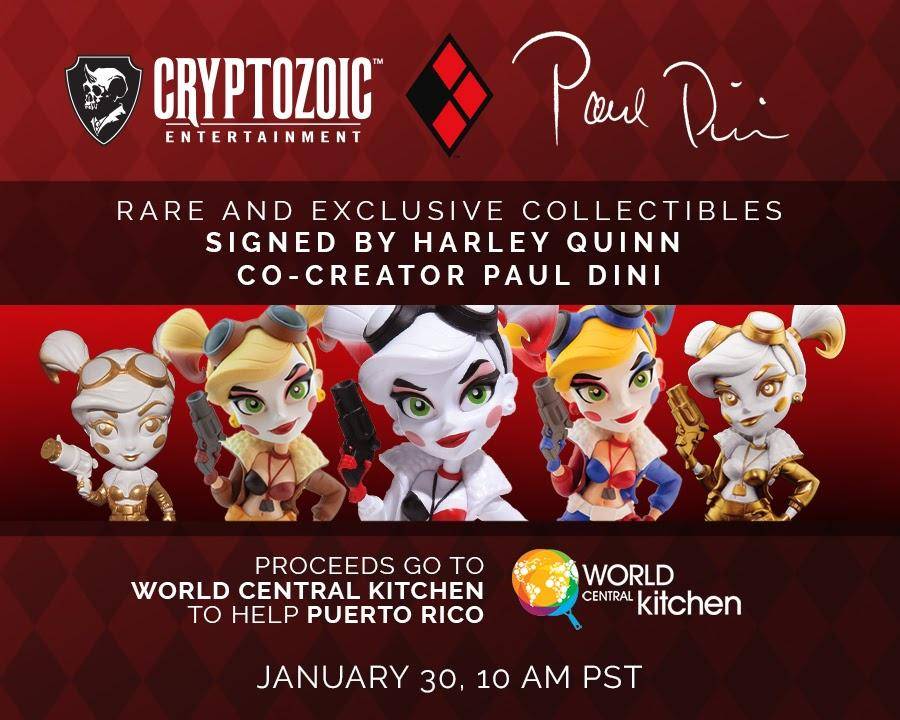