CHICKENHARE AND THE HAMSTER OF DARKNESS

Chickenhare and the hamster of Darkness is a collaboration between  Sony Pictures International Productions and nWave Pictures . Rabbit meat tasted like Chicken so as weird as it may sound, this creature does make sense. Even if it breaks the law of Science and Biology. This movie is based from the Chickenhare graphic novels that were written by Eisner Award nominated writer, Chris Grine.

Adventure awaits for #Chickenhare, a one-of-a-kind hero born half chicken 🐔 half hare 🐰, who embarks on an epic journey full of risks and discoveries, to save his father and chase his dream, no matter his difference. Coming to cinemas in 2022! @nWave#animationstudio#animationpic.twitter.com/ByGazG8JB1

— Chickenhare and the Hamster of Darkness (@chickenharefilm) November 30, 2021

This movie is based on the Chickenhare graphic novels. One big change I noticed from this adaptation is the design changes of the characters. The faces of the characters are more expressive in this film. Here is what they use to look like in the graphic novel. The lead character also use to be white but they decided to go for a warmer buff color in this adaptation. This is what Chickenhare use to look like back then. 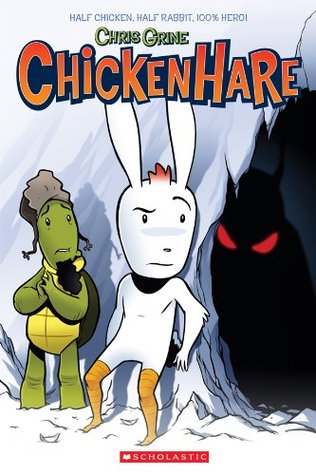 Chickenhare and the Hamster of Darkness are about the titular character who wanted to feel accepted by society. He is not chicken enough for the chickens nor Hare enough for the Hares. To make it worst for him, he is also clumsy. Even if he has such struggles that don’t stop him from his desires to have adventures. His Adoptive father is King Peter. He found him Chickenhare when he was a baby during one of his adventures. Despite being adopted, His father loved him truly. His evil Uncle will try to take over his Uncle’s Kingdom but he will try to stop him. He will be accompanied by his friends Abe the turtle and Meg the skunk during his adventures. I believe this movie is an allegory about being biracial and also about being adopted. It doesn’t matter if the people who surround us reject us as long as we accept ourselves.