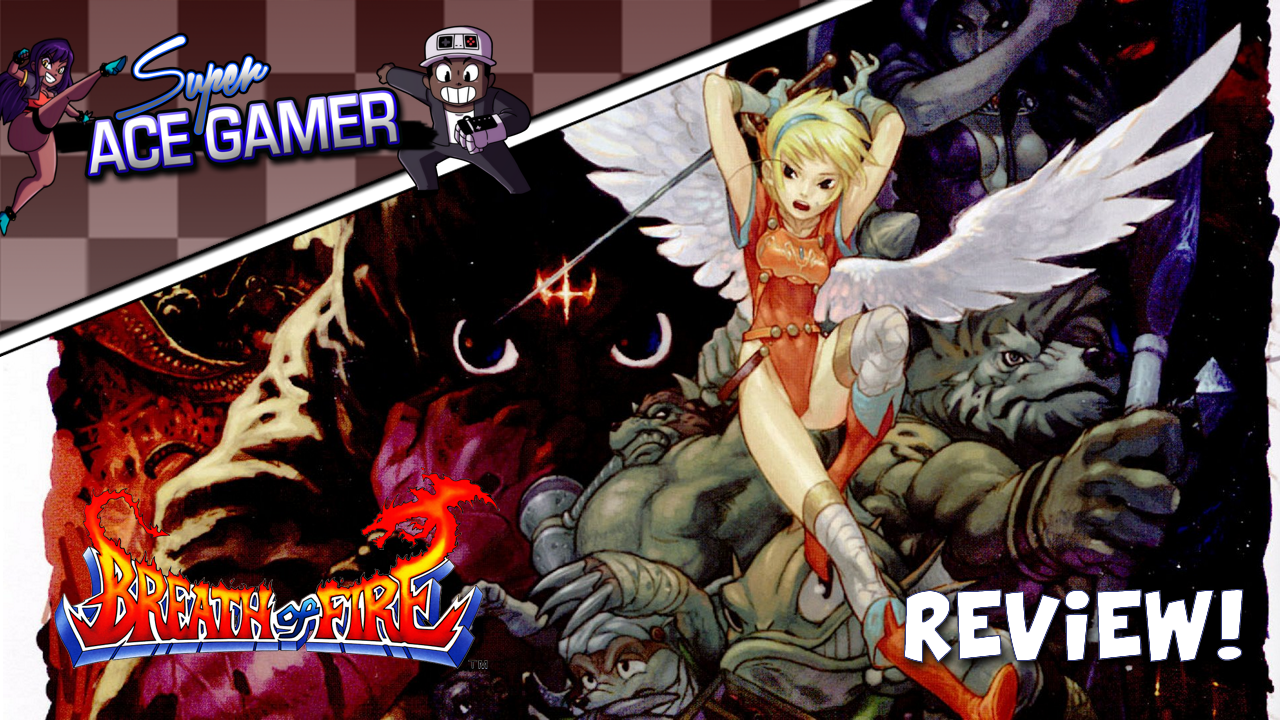 Breath of Fire is one of the first JRPG games I ever played, right along with Chrono Trigger and Final Fantasy IV. Pokemon was the game that got me into JRPGs, but I want to play something with a really engrossing story. Breath of Fire has an interesting story, characters, and…some translation errors, but will it live up to it’s very day as one of the greatest JRPGs out there?

Developed by Capcom in 1993 and published by Squaresoft now Square-Enix in 1994, Breath of Fire is one of the first JRPGs out there. What about Sweet Home and Destiny of an Emperor–Ok let me rephrase that…first LEGIT JRPG from Capcom. Cause counting Sweet Home, it’s more of a survival horror with JRPG elements, and Destiny of an Emperor is more like a turnbased JRPG with battle against your units. Breath of Fire is just a normal JRPG with awesome story and characters, plus sweet mechanics you can find during the game.

Breath of Fire Story:
The story starts off in another world and time, the Dragon clan built countless of empires through time, but the dragons fought countless battles to pursue empty dreams and goals. Enter the Dark Dragon Clan, a group of ruthless solders hell bent of bringing chaos and disorder to the world, destroying countless lives for war. Sara, the sister of the protagonist, Ryu, fought against one of Zog’s high rank officers, Jade, after Jade sent the Dark Dragons to destroy the village that Ryu was raised, yet she’s defeated, and now it’s up to Ryu to find out what happened to his sister but to stop the madness of Zog and the Dark Dragons. Along the way you will meet Nina from the Widlan Kingdom, Bo from Taunar, Karm the pick-locking thief, Gobi the fish merchant, Bleu the arrogant serpant sorceress, Ox the hard hitting blacksmith, and Mogu…the mole who digs. He’s useful, but not in battle! My advice, don’t use him in battle, but…if you want to go ahead. Anyways, that’s the story, Dark Dragons wreck shit up, your sister’s missing, you left to do one job…Find her and defeat the Dark Dragons. That’s it.

Presentation:
The open world of Breath of Fire is like something out of the 16 bit JRPG back in the early 90s. You’ve got a lot to explore, find hidden items, power-ups, and armor equipment. but most of the items, you never understand how it’s going to be used or used during battle, like the C-stn. You see? this is what I was taking about earlier! Half of the items, you never going to understand the meaning of the item! It’s like trial and error for new-comers! If you use the item in or out in battle, you will waste it and wish you could’ve keep it later on in the game! Let’s talk about the music score. The game’s music was composed by team Alph Lyla: the Capcom team of composers of Yasuaki Fujita, Mari Yamaguchi, Minae Fuji, and Yoko Shimomura (who later compose the soundtrack to the Kingdom Hearts series for Square Enix). Big names in the Capcom development team like Keiji Inafune, who does several art design for Breath of Fire. During this time period, he was working on Mega Man X. The producer: Tokuro Fujiwara, realized that Capcom need a JRPG genre entry, since most of the games are platformers like Ghost and Goblins and Mega Man. There were several Disney licensed games from Capcom too. During this time period, Capcom and Konami are my favorite companies when it comes to good quality titles. Square was the next company that I enjoy when it comes to JRPGs. Nowadays, Capcom and Konami mostly fall into the area of microtransactions, and payloads…ugh…l-let’s not talk about it…

Breath of Fire Gameplay:
Like any traditional JRPGs, it’s turn-based with random encounters. You can learn special abilities along the way. Bleu can level up faster than the others and willing to gain powerful magic than Nina. Nina is more of a healer and a buffer, she can heal more than Ox and create defense and attack buffs just to help the main party to do some damage plus protect themselves from massive damages from the enemies. The only characters that are good with melee are Ryu, Bo, Gobi, Ox, and Mogu (just to let you know…Mogu sucks in battle…just sayin…). Anyways…Ryu can turn into a dragon…yeah…he can turn into a dragon just to kick some massive ass against the bosses. I use the dragon abilities against the boss, even against the final boss itself because…well…I will explain along the way once we reach the ace it or fail it! Anyways, Capcom knows what they are doing when it comes to making an awesome JRPG title like Breath of Fire with wicked game mechanics…but…I wish they can keep up after the 4th game when Dragon Quarter came out and…I have some unkind words about this game…Oh I forgot to mention…Karn’s fusion. Yeah, Karn is also a melee fighter, but also he has the ability to fuse. He can fuse along with Bo, Ox, Gobi, and Mogu…FINALLY MOGU’S USEFUL FOR ONCE! They are four fusion spells hidden in the map where you search nook and cranny from town to town just to find spells. There’s Shin, Debo, Doof, and Puka. Shin is where you fuse Karn with Bo and Gobi to open secret passage and pretty useful in battle.

The game took me 21 hours to finish. 3 hours a day trying to beat it, 7 days total, and it’s worth it.  Is it one of my favorites in the Breath of Fire series?   No, but my main favorite is Breath of Fire III for the Playstation, and ported to the PSP.

The Popgeeks Review Of Playstation Vue

The Mathematics Of Mega Man

The Turing Test (Xbox One) Review