From the creator of The Slasher hit Until Dawn. Supermassive games and Bandai Namco released the trailer of the 3rd game of the Dark Pictures Anthology. Following the success of Man of Medan and Little hope is the 3rd installment of Dark Pictures anthology. In Man of Medan, You tried to escape a Ghost ship. In little hope you survive a bus crash only to be stranded in a town with history of Witch hunting. Now you are in the middle of the Arabian desert during the Iraq war.

The House of Ashes is an interactive survival horror game with Iraq war as the setting.You are not going to deal with a war battlefield. 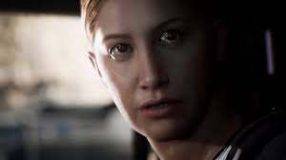 Ashley Tisdale of High School Musical and The Spring Breakers fame will be voicing the main character.She will also provide her likeness for the motion capture of her role. The synopsis of the game tells that the story is about a group of American Marines who will encounter an Ancient evil. With the middle eastern dessert as a background and Iraq war as the setting, Ancient Sumerians could be involved. Their advanced weaponry will be useless from the danger waiting for them after they discovered an uncharted Ancient temple. The plot have a bit of similarity with Amnesia Rebirth and The British horror film “The descent”.