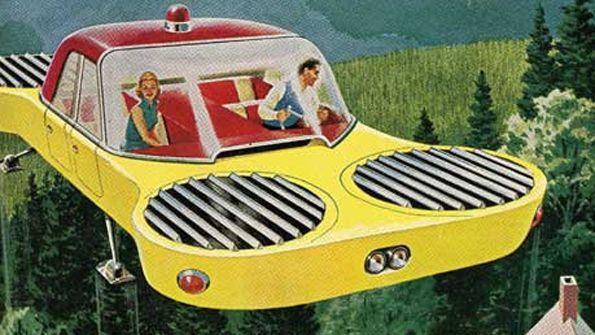 It’s a lot of fun to look at the future of the past. Those gleaming domed cities, flying cars, atomic jetpacks, and personal robot butlers that were standard visualizations of the farflung 1990s in media created in the 1950s. Okay, so a lot of it’s silly and impractical. But I still want that flying car.

And it turns out many Americans do, too, although they are a bit scared of more plausible developments. The Pew Research Center recently interviewed a group of Americans on their feelings about the next 50 years and found that 59 percent of them were optimistic that technology would make people’s lives mostly better in the future. Thirty percent were negative Nancies and assumed mostly worse, 10 percent accurately answered that they didn’t know, and one percent refused to answer.

Before we go any further, 500 out of the 1001 people interviewed were surveyed over landline phones, and that might be why the largest group, 297, is over 65, while people 18-29 make up just 144 of the respondents. The survey definitely skews old.

That might be why, even though there’s an overall optimism, the answers to specific questions seem tinged with unmistakable fear of the new.

For example, pulled from the survey results:

Yep, grandma does not want you to dump her with some soulless diaper-changing robot.

Only 33 percent of people surveyed thought human colonies on other planets were definitely or probably possible over the long term, although people 18-29 were more optimistic at 43 percent; and only 19 percent thought humans would one day definitely or probably control the weather. More optimistically, though, 82 percent of respondents thought people will definitely or probably be able to get organs grown for them in the lab; and a whole 39 percent thought teleportation, one of the more far-fetched ideas on the list, might one day be possible. One percent claimed that had already happened, but there’s always a few jokers in every room.

And when it came down to tech devices, the most desired was improved health and longevity with 9 percent, time travel came in second with 9 percent, and the trusty flying car still caught the fancy of six percent of people. But the winner was none of the above, with 11 percent of people wanting no truck with your fancy future hoohas. And 28 percent not sure what future things they’d like to have.

You can read the full survey here: