Limited Run Games, up to this point, was known for producing small print runs for console indie games. Today they shattered that tradition and hooked their biggest client ever: Sony. A physical disc version of Jak & Daxter: The Precursor Legacy suddenly appeared on the site early this morning. There was no warning from either company, other than a message about a “surprise PS4 release” that would happen December 7.

If anything is more controversial than that, it’s how many copies were printed: 5,000, same number as their smaller titles. Limited Run has already confirmed that physical copies of Jak 2, Jak 3, and Jak X Extreme Combat Racing will be sold at some point, hopefully with prior warning this time. But the first Jak will never be back. If you’re reading this, it’s too late. Annoying, isn’t it?

Most PS4 games offered on Limited Run have two purchase chances: one at 6 AM PT and another at 3 PM PT. This is fine for the low-traffic items because it takes them hours to sell out. But for the high-demand, big-ticket items like Jak & Daxter, neither of those times are convenient for anyone with a job or a life. It’s either be there at that exact second or pay a scalper later…kinda like trying to buy an NES Classic in 2016.

But think about what this is for a minute. 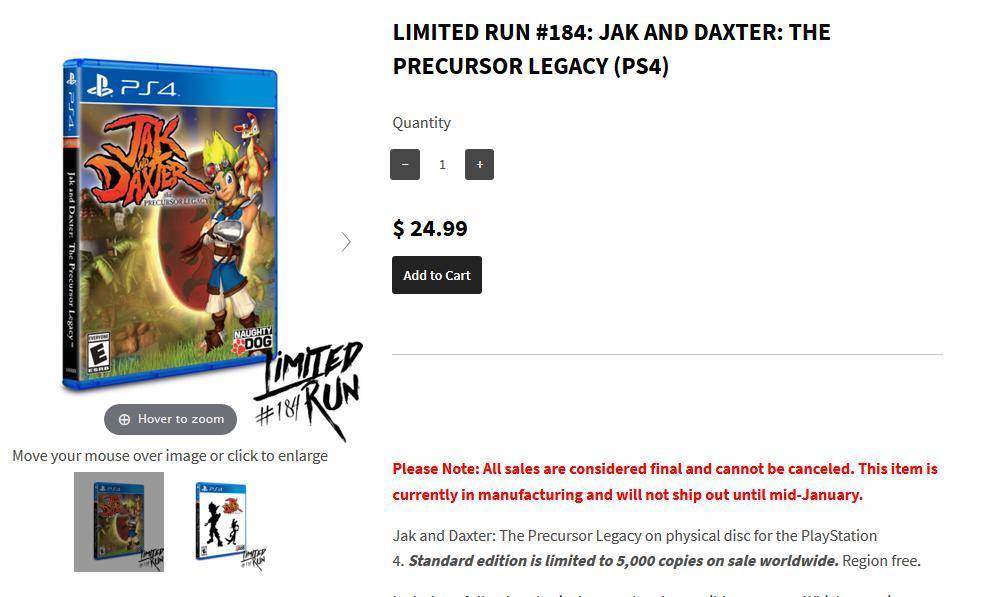 Unlike most Americans today, I was in a position where I could actually buy this. Here is the screencap for proof. I had about ten minutes to decide. I chose not to, for three reasons:

Despite these marks against it, there are people who collect Naughty Dog-related material and might feel compelled to get this anyway. I fully understand — I came to the Limited Run site to get the latest physical Shantae release, and I think I already own four different printings of the game in question. I just like Shantae stuff.

More Jak material will be offered on the Limited Run Games site in 2019.